Many safety-critical computers are embedded in cyber-physical systems like cars or aircraft. Safety-critical systems in automotive, aviation, railway, and power grids combine communication, computation, and control. Combining computation and control leads to hybrid systems, whose behavior involves both discrete and continuous dynamics originating, e.g., from discrete control decisions and differential equations of movement. Combining communication and computation leads to distributed systems, whose dynamics are discrete transitions of system parts that communicate with each other. Several of these systems form dynamic distributed systems, where the structure of the system is not fixed but evolves over time and agents may appear or disappear during the system evolution.

Combinations of all three aspects (communication, computation, and control) are used in sophisticated applications, e.g., cooperative distributed car control. These systems are (dynamic) distributed hybrid systems. They cannot be considered just as a distributed system (because, e.g., the continuous evolution of positions and velocities matters for collision freedom in car control) nor just as a hybrid system (because the evolving system structure and appearance of new agents can make an otherwise collision-free system unsafe). 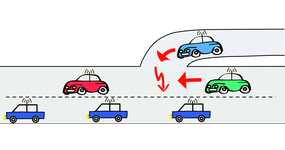 In this work, we present the first formal verification approach for (dynamic/reconfigurable) distributed hybrid systems [2,3].

Note: The proper typesetting of the name QdL for quantified differential dynamic logic is Qdℒ. In LaTeX, I use the following for typesetting Qdℒ:

We address a fundamental mismatch between the combinations of dynamics that occur in complex physical systems and the limited kinds of dynamics supported in analysis. Modern applications combine communication, computation, and control. They may even form dynamic networks, where neither structure nor dimension stay the same while the system follows mixed discrete and continuous dynamics.

The canonical references on this approach are [2,3]. Quantified differential invariants have been introduced in [4]. There is a recent survey in [7]. Also see publications on distributed hybrid systems logic and the publication reading guide.

Any opinions, findings, and conclusions or recommendations expressed are those of the author(s) and do not necessarily reflect the views of any sponsoring institution.